Opening ceremony of the International Year of Indigenous Languages, supported by Sakhalin Energy and Lukoil, took place at the UNESCO headquarters in Paris.

The event was attended by representatives of member States, indigenous peoples, UN agencies, public institutions, Russian and international business, civil society and academia, mass media and private sector. The event included thematic round tables, dedicated to protection and popularization of indigenous languages as well as increasing access to knowledge and information for language speakers.

Russian delegation was headed by Igor Barinov, Director of Federal Agency for Ethnic Affairs, who spoke at the high-level segment “Role of Languages in Achieving the Goals of Sustainable Development and Peace”.

“The issues of the conservation and support of indigenous languages are critical for Russia - multilingual and multi-ethnic nation. Unfortunately, global process results in inevitable loss of languages, therefore the events attracting the attention of the international community to this problem are extremely important. Our State supports the languages of even the smallest ethnic minorities, because language is not just a communication tool, but a large layer of cultural heritage representing peoples’ chronicle”, he said.

In his speech Barinov noted that plan of implementation for the Year of Indigenous Languages includes more than 700 events to be arranged on at the federal and regional levels in urban and small towns. 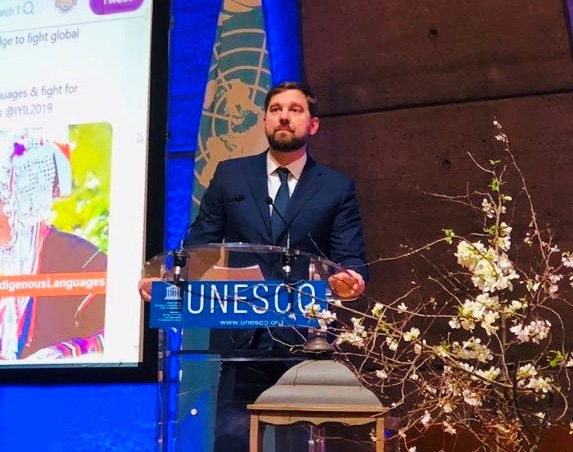 Socially responsible oil and gas companies Sakhalin Energy and Lukoil support implementation of many events dedicated to the International Year of Indigenous Languages.

According to participants of the opening ceremony, activities to be carried out as part of the Year of Indigenous Languages will contribute to improving the living standards of indigenous communities by strengthening the capacity of language speakers and organisations representing the interests of indigenous peoples.

UN General Assembly proclaimed 2019 as the International Year of Indigenous Languages to draw global attention to critical risks that threaten the indigenous languages, increase the relevance of these languages in supporting sustainable development, reconciliation, good governance and peace-building.

Sakhalin Energy has been conducting work with indigenous peoples since its foundation in 1994. Since 2006 the Company jointly with Regional Council of the Authorised Representatives of the Sakhalin Indigenous Minorities and Sakhalin Oblast Government has been implementing partnership programme Sakhalin Indigenous Minorities Development Plan. In addition to the Plan, one of the major activities of Company’s social activities is promotion of safeguarding and popularisation of cultural and linguistic heritage of indigenous ethnic groups residing in the island region.