“The Age of Pioneers”: Sakhalin Energy LNG Plant Through the Lens of Russia 24 Channel

The film crew of Russia 24, the Russian information channel, spent three days at the Prigorodnoye Production Complex, following which the Energetika programme broadcasted a special report.

It is dedicated to the tenth anniversary of the first scheduled cargo of Russian liquefied natural gas produced under the Sakhalin-2 project. This event opened an important energy route for Russia and ensured the country’s entry into the global LNG market.

“Comparing the present-day LNG projects with the Sakhalin-2, I think they are being implemented taking into account the technical solutions that served as a foundation for the launch of our project and its achievements,” said Roman Dashkov, Chief Executive Officer of Sakhalin Energy, at the beginning of the programme.

There are many vivid examples at the LNG plant that support his statement. For example, when the dual mixed refrigerant (DMR) technology is used for the production of LNG, the benefits of sub-zero ambient temperatures in the natural gas liquefying process are obvious. This technology was developed by Shell specifically for the Sakhalin Energy LNG plant.

The underlying idea of the technology is that the composition of the pre-cooled mixed refrigerant can vary depending on the ambient temperature in order to maximise the capacity of the equipment, which ultimately allows for an increase in LNG production by 15–20% per year,” said Alexander Singurov, Deputy Production Director, LNG Plant Technical Support Manager.

The company’s successful experience is the basis for increasing hydrocarbon exports to the Asia-Pacific region. To-date, more than 100 million tonnes of liquefied natural gas has been shipped to buyers, and it is true to say that Sakhalin LNG is strengthening Russia’s position as a major energy producer.

Every two days, liquefied natural gas is loaded on ice class LNG carriers, specially built for the transportation of Sakhalin LNG. The Russia 24 film crew had an opportunity to visit one of them — Grand Elena — right before the offloading operation. The following day, its four spherical tanks were filled with 145 thousand cubic metres of liquefied gas, and the vessel headed for Taiwan with the LNG cargo on board.

The loading of tanks and other production processes are closely monitored by the Central Control Room (CCR) operators. Today, most of its employees are residents of Sakhalin — highly qualified specialists who have received additional training at the Prigorodnoye Production Complex training centre.

Besides the LNG carrier and the CCR, the film crew visited the laboratory, the training centre, and the LNG plant trains. One of the filming sessions was held on the roof of the LNG storage tank.

Artem Yamshchikov, a reporter of Russia 24 channel, shared his impressions of the production complex: “I first saw the Sakhalin LNG plant about four years ago when I was passing through this area. When I saw it fr om the distance, I wondered how it was possible to make head or tail of all those tangled pipes. These days I have had an opportunity to study the production facility more closely. It is very good that the plant is operated by real professionals who take care not only of production, but also of people’s safety and the environment. After all, Sakhalin Island is Russia’s gem, a place filled with power, wh ere modern technology and virgin nature exist side by side.”

The Age of Pioneers (Special Coverage). 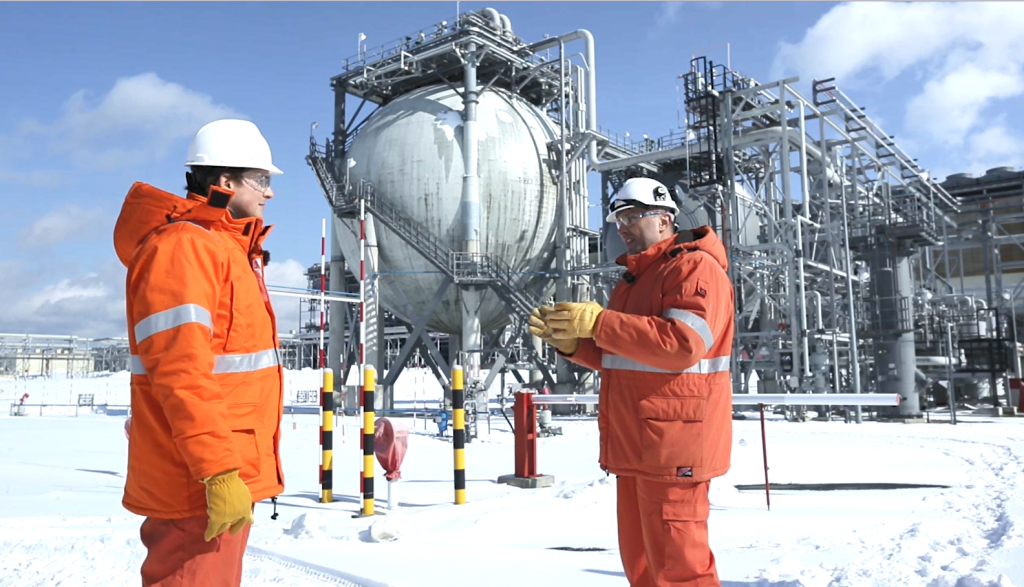