Presentation of the New Book by Vladimir Sangi, the First Nivkh Writer

The presentation of the new book by Vladimir Sangi was held at the Nogliki Museum of Local History on 18 March, when the founder of Nivkh literature celebrated his birthday.

The book of lyric poems titled “We Will Set Out at the Crack of Dawn...” opened yet another facet of Vladimir Sangi’s talent, whose creative activity is associated with fundamental works of literature devoted to the life of the Nivkh people. As it turned out, poetry had always lived in the heart of the writer — poems were born, delighting the author himself and those who were fortunate enough to hear them. Now it is time to share the most intimate literary creations with a wide range of readers. From now on, Nivkh literature will include not only fairy tales, legends, stories, but also love lyrics.

Moreover, the author disclosed on his birthday that he was also a composer, which was a great surprise to experts and admirers of his creative work. According to Vladimir Sangi, he often writes poems in the song format, setting the original lyrics to music that he has written himself.


It was exactly this way that virtually every poem of the new collection was created.

The idea that Nivkhs needed more than just a book in their mother tongue, but the one that they could sing occurred to Vladimir Sangi about a year ago. “Today is a very special day — my dreams have come true. But it was not me who wrote this book — it was written by the women whom I loved. It was them who gave me feelings, which turned into music and words literally overnight, which I often heard in my dreams,” shared the author.

All these poems written in different years and collected into one book make up an ode to Woman whom the author calls “the goddess of his luck”. The poems are not only about love for Woman — they reveal her role, her place and significance in man’s universe.

The women who inspired the author with their attitude towards the Nivkh language — Galina Sangi, Evelina Antipicheva and Inga Krasilnikova — attended the presentation of the collection, and accepted the poems dedicated to them as a token of gratitude. Each poem included in the collection has its own story, and the author shared them with the audience.

For example, “The Girl from Ekaterinburg”. This poem was written in Russian and has no analogue in Nivkh, because it is dedicated to a Russian girl who arrived at Nogliki and said that she absolutely needed to see Vladimir Sangi. Reaching his nomad camp, she told the writer that she had wanted to see him since she read his book “Legends of Ykh-Myth”. “I opened it... and could not close it until I had read it. And then I said to myself: ‘I have to embrace the person who wrote it’,” recalled Vladimir Sangi the words of his guest. This occurrence prompted him to write the poem “The Girl from Ekaterinburg”.
The publication is unique not only in its format — a collection of poems and songs, but in the fact that the poems included in it are presented in two languages: Russian and Nivkh. The book is of great interest to anyone who studies the Nivkh language and is interested in the Nivkh culture.

The collection “We Will Set Out at the Crack of Dawn...” is illustrated with contrasted silhouette appliquéd pictures, made by the famous Uilta craftswoman Albina Osipova.

The book was published by the Nogliki Centralised Library System (Municipal Institution of Culture) with the financial support by Sakhalin Energy as part of the Sakhalin Indigenous Minorities Development Plan. 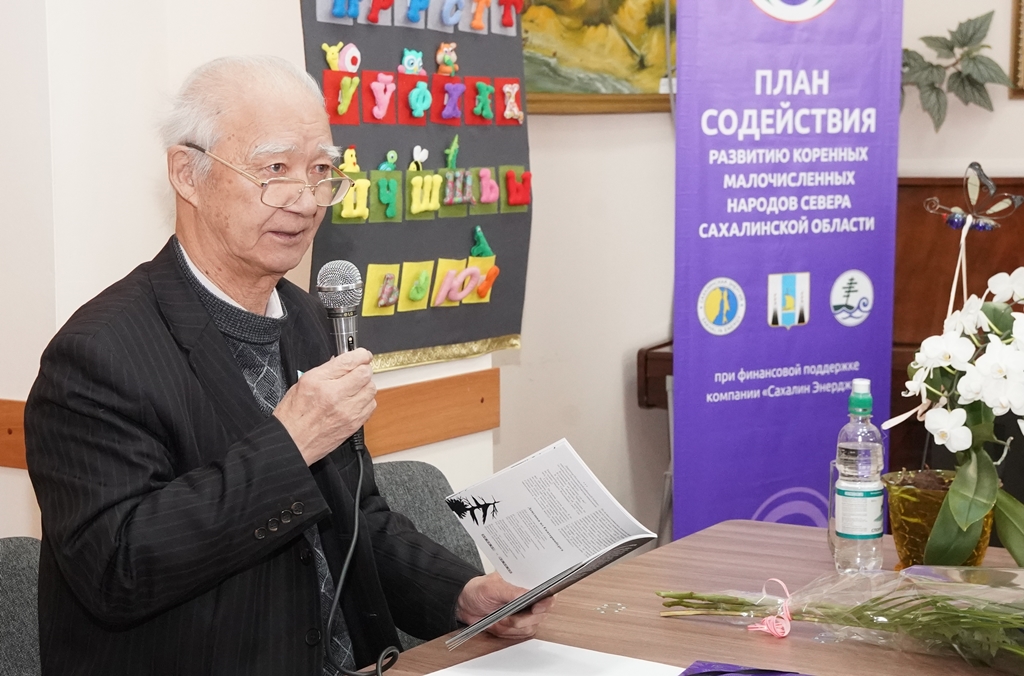