This federal-scale event brought together in Yuzhno-Sakhalinsk passionate young men and women from many regions of our country who aspire to contribute to the social and economic development of Sakhalin and the Kurils.

On the opening day of the forum, the company’s specialists spoke as experts at several sessions – Ostrova of the Future, Ostrova Media, as well as at the discussion session, which was held in the talk-show format. Representatives of the government, business, and society met ‘in the open’ to discuss the following question: what needs to be done to retain youngsters on the island and bring more young specialists here?

“We are very much interested in talented graduates – every one of them has a chance to gain unique work experience at one of the largest oil and gas projects in the world,” said Maria Nikolaeva, Senior Recruitment Specialist of Sakhalin Energy, “However, young people are not willing to relocate to Sakhalin because they don’t know much about it. Perhaps, this problem could be solved by creating the brand of Sakhalin Oblast to present enormous opportunities of the region – the so-called business card, which would promote its image. This would help us greatly in attracting the best human resources fr om all over the country to our company.”

One of the key features of the regional brand concept could be the positioning of the Oblast as a modern tourist centre. According to the participants of the meeting, the pandemic gave a boost to the development of domestic tourism by redirecting Russians to recreational locations within the country. But in this situation, the price/quality ratio is the Achilles’ heel, and Sakhalin is not an exception. The foreground of the island must be occupied by a tourist product which could be used not only by local, but also by visiting young people. And for that, it must first of all meet such criteria as transport accessibility and developed environmental infrastructure.

It could include an interactive museum of gas, which would be furnished with everything to make visitors comfortable – this was one of the forum’s brightest initiatives voiced by the youngsters who visited the first Russian LNG plant in Prigorodnoye. During the bus tour, the guests discussed the topics of green production and high technology and were astonished to learn that a spawning stream ran through the territory of the plant. Youngsters believe that building a museum in this picturesque place will create a new tourist route in the region. In such a museum complex with lecture halls, interactive mockups, and a photo area, anyone would easily get acquainted with the gas industry and plant’s operations. So far, the project is only on paper, but it has already been presented to Valery Limarenko, Governor of Sakhalin Oblast.

The regional head was present when the final chord of the youth convention was played – the grand closing ceremony where the participants summed up the four days of activities. In his address to the youth, Valery Limarenko noted how important it was to hold a patriotic forum on Sakhalin. “OstroVa have brought us all together here, and there are three reasons for that. The first one is the past of Sakhalin – this is where the War ended 75 years ago with the whole island being the witness of that episode, and visiting it means to be imbued with the history of our whole country. The second is the present of Sakhalin where we love young people, care for them, and implement new projects for them. The third one is in the future of this territory wh ere the most ambitious plans will come true. But we need to prepare for that – we will scale new heights together! See you next time!” Valery Limarenko summed up. 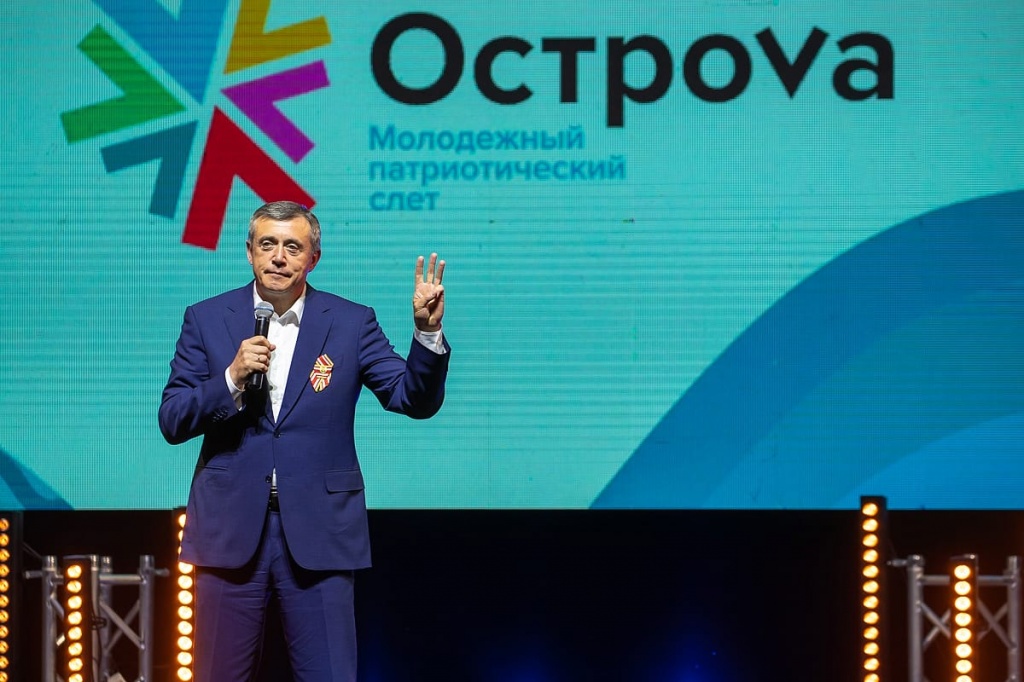