A Triune Dialogue marking the 15th anniversary of the UN Declaration on the Rights of Indigenous Peoples was held on 14 September on the margins of the International Fair Treasures of the North.

The historic document recommended to all UN member states was adopted on 13 September 2007 to become the most comprehensive document detailing the rights of indigenous peoples in international law and politics.

"The indigenous minority peoples of the North are an integral part of our great multinational Russia. By maintaining a traditional way of life in a harsh climate and being a minority, our peoples have been accorded a special status. The Constitution of the Russian Federation declares native human habitats and ways of life to be values protected by the State. While a lot has been done in recent years to refine both federal and regional legislation, there remains more to be accomplished. We certainly take into account the positions of international law and closely study the experience of other countries in protecting the rights of their indigenous peoples", Grigory Ledkov, President of the Russian Association of Indigenous Peoples of the North, Siberia, and the Russian Far East (RAIPON) and a Russian Federation senator, greeted the participants in the dialogue. He emphasised that representatives of indigenous minorities of the North have been active participants as experts in the many years of work to develop the text of the UN Declaration on the Rights of Indigenous Peoples, drawing on both the historical experience of our country and the demands of the present day. 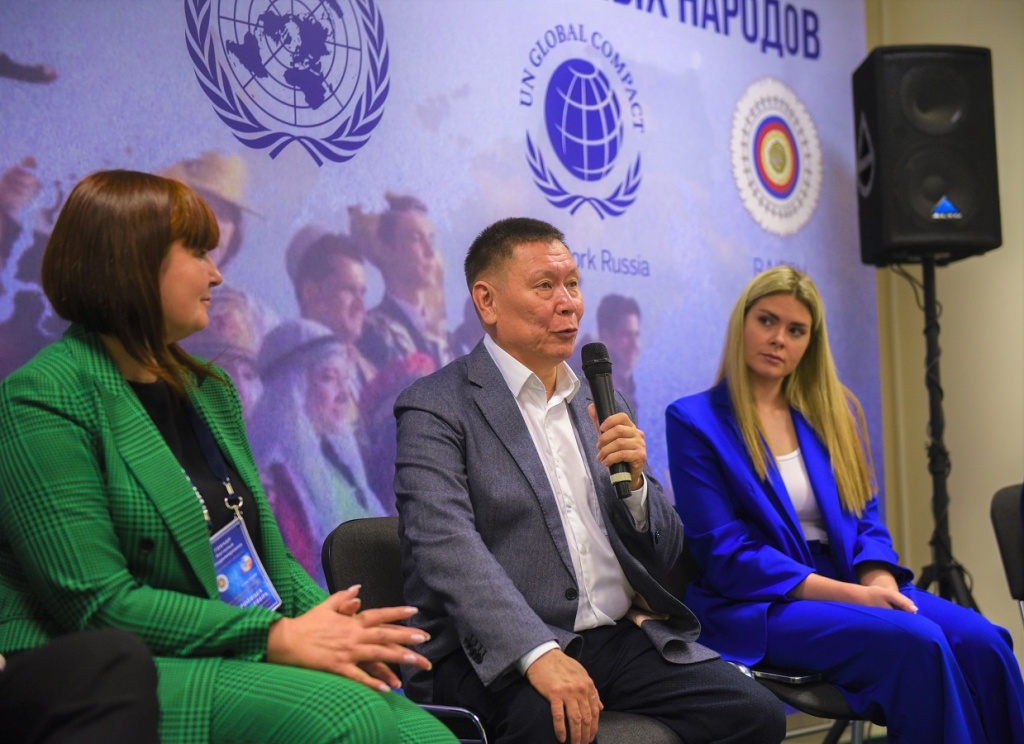 Grigory Dyukarev, Co-Chairman of the Sustainable Development Working Group (SDWG) of the Arctic Council and Chairman of the Krasnoyarsk Krai Government Council of Russian Indigenous Minority Peoples Inhabiting the Krasnoyarsk Krai, reminded the audience of the historical legacy. He said that, as early as 200 years ago, Mikhail Speransky’s Statute on the Administration of the Non-Russian Peoples adopted in the Russian Empire in 1822 covered the distinctive aspects of life of the indigenous peoples of Siberia and, accordingly, determined their administrative and legal status. "Many statements in the Charter echo the articles of the Declaration and in spirit correspond to the realities of today," said Grigory Dyukarev.

Alexander Gorelik, a representative of the UN Global Compact National Network, explained why the work on the Declaration had been so difficult and taken decades to complete. According to the expert, the provisions of the document affect the interests of many stakeholders, including governments and global market players. "That said, different countries have different priorities on their national and international agendas. For countries such as Russia, indigenous minorities constitute a central topic, while in other states they simply do not exist. In September 2007, the UN General Assembly adopted the Declaration with only four out of 158 countries (the United States, Canada, Australia, and New Zealand) voting against the text. The document was approved by the majority of votes," said Alexander Gorelik.

Natalia Gonchar, Head of Corporate Affairs at Sakhalin Energy LLC, underscored the special significance of the Declaration for industrial enterprises. "2007 was an important milestone that showed a common vector of cooperation for businesses, society, and the government. As a member of the UN Global Compact LEAD initiative, our company has established a working group on the interaction between businesses and indigenous peoples, with The Business Reference Guide to the UN Declaration on the Rights of Indigenous Peoples resulting from its efforts. The document aims to provide the business community with practical guidance on how to respect and support the rights of indigenous peoples in their operations and sphere of influence, including case studies and practices of businesses from across the world, including Russia. It is worth pointing out, for example, that the principle of free, prior, and informed consent, as enshrined in the Declaration, was, for the first time in the world, applied by an industrial enterprise in our country, specifically in Sakhalin Oblast. It is still considered a pioneering experience while continuing to be applied by the partners of the Sakhalin Indigenous Minorities Development Plan," said the Sakhalin Energy official. The programme has been implemented since 2006 on the basis of a public-private partnership among the Sakhalin Indigenous Peoples’ Council of Authorised Representatives, the Sakhalin Oblast Government, and the operator of the Sakhalin-2 project.

Summing up the event, Yulia Yakel, a lawyer at RAIPON, expressed confidence in the continued cooperation for the benefit of the indigenous peoples of the North, who "continue living their lives following the ancestral precepts of respect for nature, for each other, and for the world around them".

The Triune Dialogue has been arranged by the Russian Association of Indigenous Peoples of the North and the UN Global Compact National Network.