The exhibition Krusenstern. Around the World is hosted by the Museum of A. Chekhov’s Book “Sakhalin Island”.

The project is dedicated to the Russian navigator, explorer and discoverer Ivan Fyodorovich Krusenstern. He stood at the origins of the Naval Institute, was a founding member of the Russian Geographical Society, led the first Russian round-the-world expedition in 1803-1806 that was very important, especially for exploring the territory of the only island region of Russia.

The large-scale exhibition is arranged to mark the 75th anniversary of the Sakhalin Oblast: it features more than a hundred memorial items and relics. Ivan Fedorovich's personal belongings include a globe from the collection of the Peter the Great Central Naval Museum.

Federal and regional cultural institutions, museums and libraries in Moscow, St. Petersburg and Yuzhno-Sakhalinsk were involved in preparing and organising the outstanding exhibition project. Sakhalin Energy LLC joined the project as a partner.

While congratulating all the attendees on having an opportunity to experience the exhibition, Vladimir Yushchuk, Deputy Chairman of the Sakhalin Oblast Government, noted: “Krusenstern was a versatile person and his round-the-world journey and stay near Sakhalin shores are of particular importance to us. I hope that as many people as possible will visit the museum so that they can learn more about the history of our region.”

“National heroes like Krusenstern are timeless and popular at all times. We need them badly especially today, during such tough times. His fate and his deeds prove that everything is achievable. The exhibition dedicated to Ivan Krusenstern has been arranged on Sakhalin thanks to the creative synergy of many organisations and people who also believe that everything is possible", stressed in her greeting Natalia Gonchar, Head of Sakhalin Energy Corporate Affairs Division.

Julia Vaks, curator of the project and researcher at the Research and Exhibition Department of the State Historical History, thanked the participants of the exhibition and added: "Moscow is connected to the Krusenstern indirectly and Sakhalin directly: "Moscow is indirectly connected to Krusenstern, but Sakhalin is directly connected. Just as there was once a round-the-world expedition, this exhibition would not have happened without the enthusiasm and desire of everyone to do their best".

The State Historical Museum is the main treasury of exhibits related to the traditions of the Russian navigation established by Ivan Krusenstern over 200 years ago. The exhibition offers visitors the chance to see rare stamps, the money that was used in the settlements of the Russian-American Company, provided by the museum. Krusenstern's expedition was initially planned as a commercial undertaking, but became a scientific and historical breakthrough in geographical research, natural history and ethnography. As the owner of Russia's largest collection illustrating the history of the Russian-American Company's settlements on the islands of the North Pacific, the Sakhalin Regional Museum presents at the exhibition discoveries from the archaeological sites of a former Russian settlement founded at the end of the 18th century.

During his round-the-world journey Ivan Krusenstern not only discovered new geographic locations, but also gathered valuable botanical, zoological and ethnographic collections. These days some of them are kept in the Zoological Institute of the Russian Academy of Sciences, which has provided a collection of fish assembled by Ivan Fyodorovich for display at the exhibition.

Each item in the unique exhibition has its own story and helps to see Ivan Fyodorovich Krusenstern as an oceanographer, explorer, and a person.

The exhibition runs until 28 November 2022. For more information, please go to the website of the Museum of A. Chekhov’s Book “Sakhalin Island”. 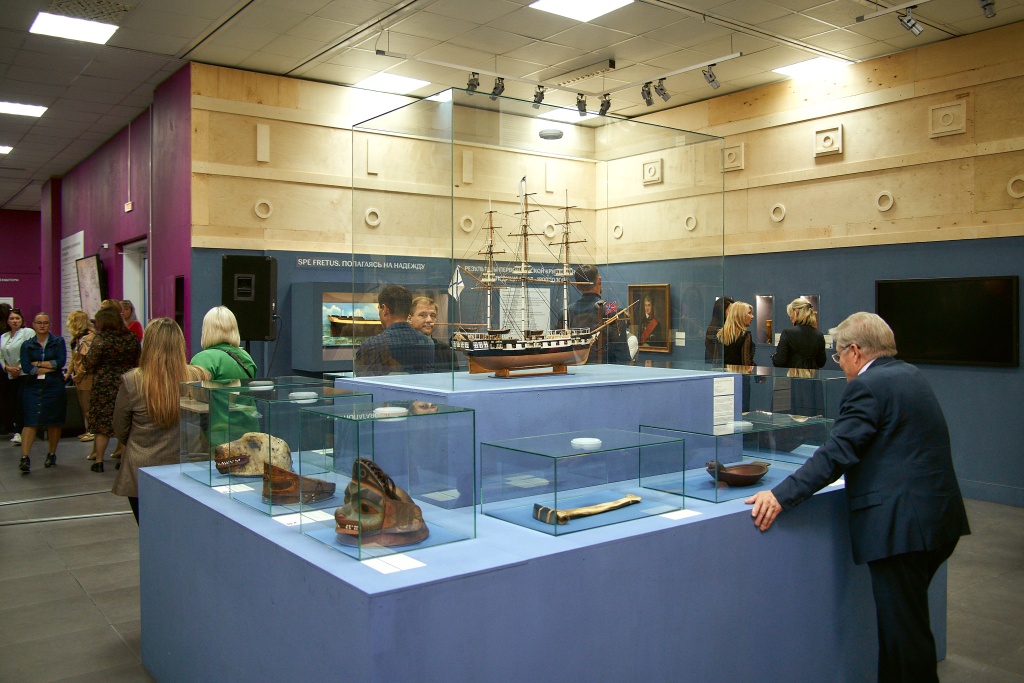